The Committee for Justice - What does it do and how does it work?

What is the purpose of the Committee?

Policing and justice were the last areas to be devolved to the local Government and deals with some of the most sensitive issues including ensuring that the Northern Ireland legal system delivers for local people.

The Assembly’s Justice Committee is responsible for checking and challenging the work of the Department of Justice as well as playing a part in considering, revising and developing legislation (laws). The Committee also takes briefings from the Minister, her officials and other stakeholders, and carries out inquiries into matters of interest.

The Committee meets each week the Assembly is sitting and members of the public are welcome to attend. 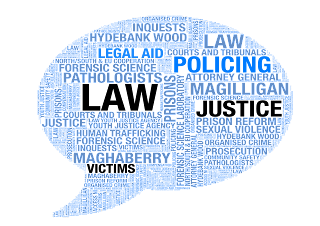 How does it work?

Some of the areas that the Committee are responsible for are:
The Committee also works with a range of bodies, including the Public Prosecution Service, Victim Support, NSPCC, Organised Crime Task Force and the Police Ombudsman.


How can I get involved with the work of the Committee?

If you want to get involved with the work of the Committee, you can respond to their inquiries, which will be published on their Committee page and read the Minutes of the meetings, as well as any Evidence Sessions. You may also request to give evidence, if you or your organisation is affected by the issues that the Committee is discussing, including Bill inquiries by contacting the Clerk of the Committee.

You can watch the Committee meetings on the live stream on the Assembly’s website and access the ‘Watch/Listen Again’ after the meeting.

You can also contact the Committee by writing to the Clerk: