What is the Single Transferable Vote (STV) and how does it work? 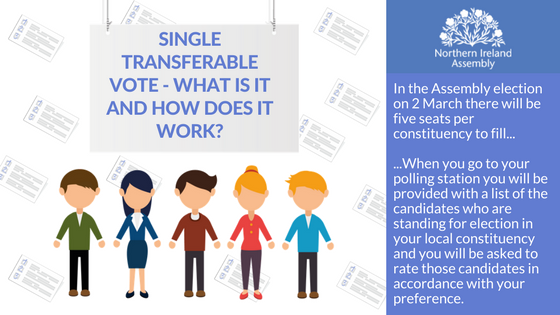 The Single Transferable Vote (STV) is a form of Proportional Representation (PR) and is the system of voting used to elect candidates to the Northern Ireland Assembly. This particular method of voting was first introduced to Northern Ireland in 1973 and is considered by many to be fairer and more representative system as it maximises choice as well as giving voters the opportunity to indicate a preference between parties and also for different candidates within parties. Many argue that it also results in fewer wasted votes as votes for smaller parties and independent candidates can still count through a transfer to another candidate. It's a complicated subject but we wanted to try and shed some light on it with the help of our Education Service.

So how does it work

In the Assembly election on 2 March there will be five seats per constituency to fill. When you go to your polling station you will be provided with a list of the candidates who are standing for election in your local constituency and you will be asked to rate those candidates in accordance with your preference. So, for your first preferred candidate you should put a ‘1’ in the box next to their name, a ‘2’ in the box next to the name of your second preferred candidate and so on. There is no maximum or minimum number of preferences to mark, so you could choose to give a preference to all candidates or to just one or two.  When the polls close on March 2, the ballot boxes will be delivered to various counting stations throughout Northern Ireland. The actual count will not take place however until the following day, Friday March 3 and it may take a couple of days for all the votes to be counted.

How are the votes counted?

What is the Quota and how is it worked out?

As an example, let’s say that there are 2,400 valid votes in constituency X and five seats to fill, we would add a one to the five seats and then divide the 2,400 votes by six, we then add a further one to this figure. This means that the quota is 401, so each candidate will need to get 401 votes to get elected.

NB: The whole number is always used in calculating the quota. Should there be a fraction, the numbers after the decimal point are ignored.

What is a transfer and how does it work?

So now that we have the quota and know the number of votes each candidate should receive to get elected, it’s on with the count. Voting papers are sorted into bundles according to first preferences and counted. Any candidate reaching or exceeding the quota is elected. If they are elected with more first preference votes than the quota, their extra votes are called a surplus.

The surplus is calculated as follows:

What happens to the transfers?

Candidate A was selected at the first count, having exceeded the quota. It would not be a fair system to transfer just candidate A’s 99 surplus papers to the other candidates. If only the ‘extra’ papers were transferred there would be no way of ensuring that the 2nd preferences on these 99 papers were representative of all the 500 ballot papers that candidate A had received: 401 people would not have their second preferences considered. For fairness, all the candidate’s ballot papers with a 2nd choice are redistributed. These are called transferable ballot papers as the voter has indicated a 2nd preference.

Yes, that does sound a bit complicated so let's take a look at Candidate A again...

...if all their papers have a 2nd preference then there are 500 transferable papers to be reallocated. This will be at a total transfer value of their surplus (99). So, 500 papers transferred to equal a total value of 99 means that each ballot paper has an individual transfer value of 0.2. This is calculated by dividing the surplus (99) by the total number of transferable ballot papers for a candidate (500). Calculated as follows:

What happens if none of the candidates reach quota on the first count?

While it would be unusual for no candidate to meet the quota on the first count this can happen. In this instance, the candidate with the lowest number of votes is eliminated and his votes redistributed to the remaining candidates in order of preference. The transfer value of each transferable paper is still 1 vote, as the 1st preference was not used.

Getting to 5 candidates elected

The above process will continue until all 5 seats are filled.

We hope this helps you get a better understanding of how STV works in Assembly elections but if you do have any questions, (or want to leave us a comment), please use the comments section below and we'll do our best to find the answers.