What happens after the election on 2 March? 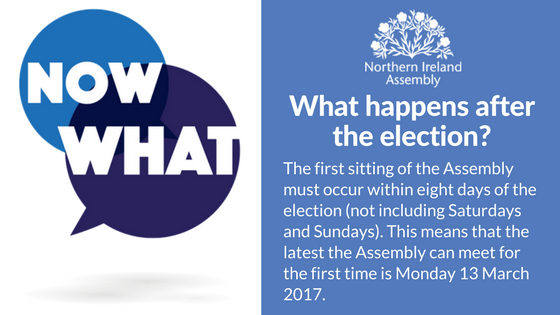 After the election, the Northern Ireland Act 1998 states that first sitting of the Assembly (called a Plenary sitting) must occur within eight days of the election (not including Saturdays and Sundays). This means that the latest the Assembly can meet for the first time is Monday 13 March 2017.

At this first sitting, all newly elected MLAs will have the opportunity to give an Undertaking and sign the Roll of Membership. It is only after they do this that they can officially take their seats. Following this, the newly elected Members can elect a Speaker, Principal Deputy Speaker and Deputy Speakers although this may also be done at the next plenary.

Executive Ministers are appointed using the d’Hondt system (with the exception of the Minister of Justice) as are the Chairpersons of the Assembly Committees which will scrutinise each Department and Minister. Chairs can only be appointed after the appointment of Ministers has occurred.


Following this, the Assembly can now begin its work with Plenary sittings and Committee meetings.
Posted by NI Assembly at 07:00